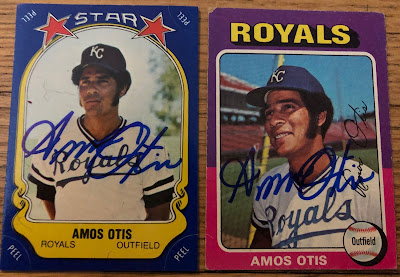 Marvel at those sideburns, gents.

Otis blossomed into one of the best outfielders of the decade after being dealt from the New York Mets to the Kansas City Royals before the 1970 season. Otis meshed with the team’s speed and defense philosophy and rewarded the Royals with All-Star nods in each of his first four seasons. He led the AL with 52 stolen bases in 1971. He won three Gold Gloves. Otis hit .478 with three home runs and seven runs batted in the 1980 World Series.

On the flip side of the coin, Otis later admitted to using a corked bat during his career.