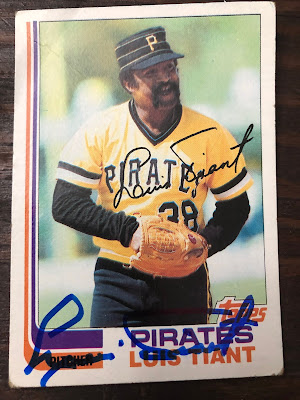 Best known for his time toeing the slab for the Indians and the Red Sox, the Cuban-born Tiant won 229 games and had a 3.30 ERA over 19 MLB seasons. He maxed out at 30.9% of the of the writers vote during his 15 years on the Hall of Fame ballot. He has since been overlooked by the Golden Era Committee twice (2012 and 2015) as well as the Modern Era Committee (2018).

He tremendously hurt his own chances of enshrinement by pitching as long as he did. Tiant didn’t hang up his spikes until after the 1981 (age 41) season. His 12-15 record and 4.76 ERA from 1979 onward (a period that included this slab of signed cardboard) weren’t disqualifying. Rather it hurt his timing.

Allow me to share with you my latest eBay pickup.

J.R. Richard being one of the players that I collect, his eminently affordable rookie card was a glaring omission from the PC. Consider that remedied after picking this sharp cornered, crisply colored card with a low bid last week. 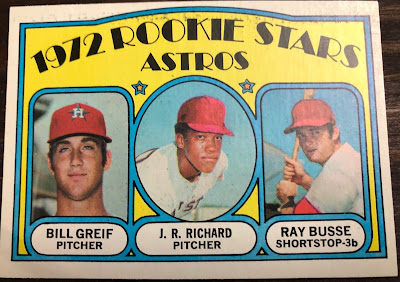 My fondness for Richard comes from stories my uncle told me as a kid. James Rodney Richard was not on my radar. I must have been talking up Nolan Ryan because Uncle Dennis cut me off, “Ryan? Fine. But his teammate was even better.”

My Uncle was stationed in Texas in the late ‘70s. To hear him tell it, Richard would walk ten, strike out twenty, and roll to victory. Hyperbole.

But Richard remains one of baseball’s great “what if” stories, and my uncle’s tellings left an impression. 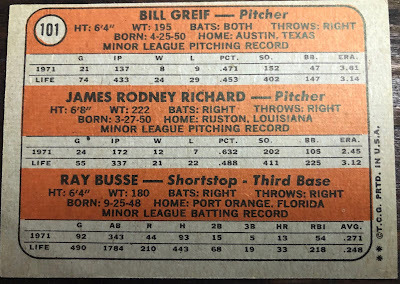 Of course, J.R. shares this slab of cardboard, so…

Greif broke into the majors at age 21. By the time this 1972 card was released, this Astros “Rookie Star” was a San Diego Padre, dealt as part of a three-player package in exchange for Dave Roberts in December of 1971.

In 1974, Greif was the Padres’ Opening Day starter. He pitched to a 31-67 over six years in the majors. His last MLB appearance came in 1976 with the Cardinals. He was 26. After sitting out the ’77 season he attempted a comeback with the Mets. He appeared in three games with the AAA-Tidewater Tides. His career MLB ERA was 4.41.

When Richard broke into the majors in 1971, also at age 21, he made an immediate impression. A September call up, Richard debuted in the second game of a doubleheader against the Giants. He struck out 15, tying the MLB record for Ks in a first start.

His potential obvious, Richard yo-yo’d between the minors and majors over the next three seasons.

After a cup of coffee in the majors in 1971, Busse had a brutal ’72 campaign. His father committed suicide. He suffered a shoulder injury. He was limited to just 70 games for AAA-Oklahoma City (he hit .207 and committed 27 errors).

Despite this, the Cardinals targeted Busse – based on his pre-1972 track record – as a starting shortstop. He actually started Opening Day for St. Louis. It did not go well. He committed two errors.

Email ThisBlogThis!Share to TwitterShare to FacebookShare to Pinterest
Labels: One Card, Players I Collect

It’s been a slow year for me TTM-wise – or at least I’ve slowed down significantly since the Spring/start of the pandemic. But, I’ve participated in a lot more through-the-mail private signings.

The latest return is Carlos Baerga, through a signing run by Jamie Blye spotted on SportsCollectors.Net. 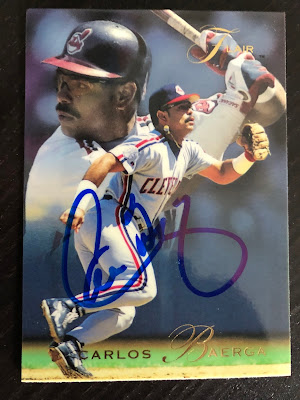 Baerga (and Sandy Alomar Jr.) had joined the Indians through an unpopular deal that sent Joe Carter to the Padres.

His peak, however, was cut short as the lavish lifestyle of a budding star took its toll. He blames his off-field appetite for discos, drink and women for on-field struggles.

His time in Cleveland came to an end mid-1996 when he was delt to the Mets in a swap that returned Jeff Kent. I have absolutely zero recollection of Jeff Kent playing for the Indians. None.

After two seasons more seasons with the Mets, Baera had a brief stint with the Padres, returned to the Indians, played in Korea, retired, served as player-manager of the Cangrejeros de Santurce (Puerto Rico), unretired, and played four more Major League seasons with the Red Sox, Diamondbacks, and Nationals.

Alright. It's been a week since I picked up two pharmacy boxes with the intent to do another break/faceoff. I got sidetracked when I pulled a HOF auto. Let's revisit... 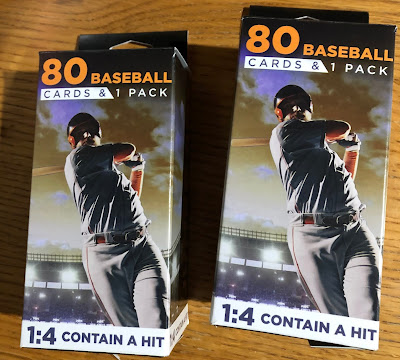 Again, I amuse myself by fielding the best Starting 9 from each box and put them head to head.

Before I get to that… 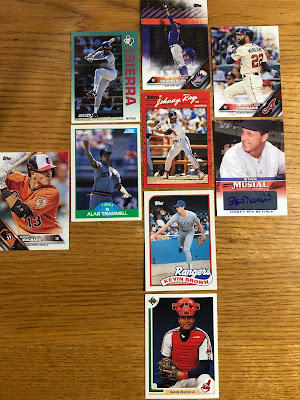 When I think of Musial, I think of an outfielder. But “The Man” played 1,016 games at first base, and no lie, the only other first baseman in the box was Jim Lindeman and his career -0.2 WAR.

Alan Trammell and Johnny Ray are pharmacy box standards and end up in a lot of these lineups.

Starting pitcher Kevin Brown feels underrated at this point. He was a six-time All-Star and won two ERA titles. I admit, I underrate him myself – no doubt soured by two poor seasons in pinstripes at the tail end of an otherwise superb career. 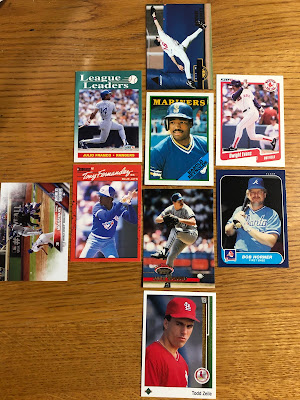 Only one Hall of Famer, and one with somewhat questionable credentials. No offense to Jack Morris, who unquestionably was a tremendous big-game pitcher, but let the record show:

Anyways, there are some under-the-radar standouts here. Fernandez, Dewey Evans, and Jim Edmonds are all underrated.

Still… this one won’t be close. 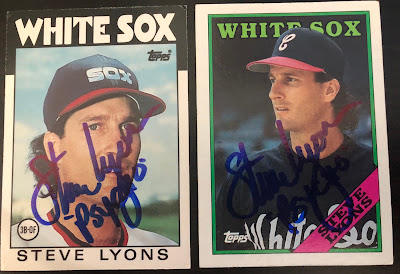 When I showed my sons the unforgettable video of Steve Lyons pantsing himself at Tiger Stadium in 1990, they rolled around the floor laughing. In my younger days, the clip was a part of every blooper reel. Still funny.

The eccentric utility man nicknamed “Psycho” had a nine-year career split across four teams (including four separate stints with the Boston Red Sox). He slashed .252/.301/.340 with 19 home runs over 2,162 at bats. He stole 42 bases and was caught stealing 32 times.

On numerous occasions Lyons’ comments in the broadcast booth have gotten him into trouble. Nonetheless, he still has a gig with NESN, the Red Sox network. For me, his best work was calling Billy Chapel’s perfect game alongside Vin Scully. 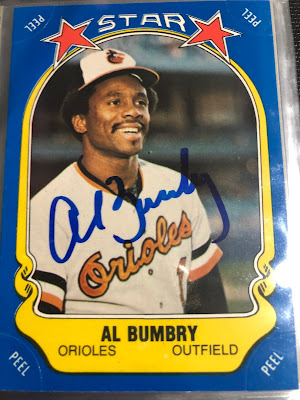 Before his MLB career, Bumbry served in the U.S. Army and received a Bronze Star leading a platoon during the Vietnam War.

Bumbry still ranks high on the Orioles franchise leaderboard for stolen bases (4th – 252) and runs (9th – 772). He played the 1985 season – his last – with the Padres, serving mostly as a pinch hitter.

I recently blogged a catch-up post with five ’81 Star Sticker set returns that came in while I wasn’t writing. I missed one… 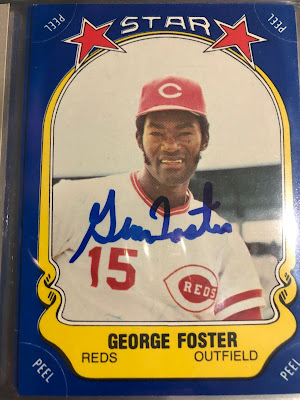 I received George Foster back from another private signing back in early August.

After another great season in 1981 (he finished third in the NL MVP voting), the Reds – who were unwilling to give Foster the five-year deal he was seeking – traded him to the Mets.

Foster’s power numbers declined with the Mets (he maxed out at 28 HRs in 1983 and never exceeded 90 RBI). The Mets released Foster in August of their eventual World Series-winning 1986 season. He was awarded a ring.

Unknown to me before this write up: Foster bookended his career with the Giants and the White Sox. He broke into the Majors with San Francisco in 1969. The outfielder-rich Giants traded him to the Reds in 1971. After his release from the Mets, Foster latched on with Chicago. Foster hung up his cleats after 15 games with the White Sox.

I picked up a couple pharmacy boxes at Wallgreens this morning thinking I’d go back to the well and do another FairField box break/faceoff, but a find in Box #2 had me saying, “Holy sh*t!” 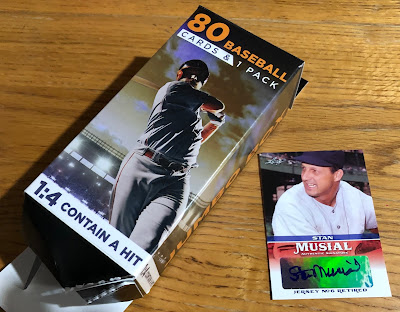 Stan “the Man” Musial? Autographed? From a Pharmacy Box?!?! 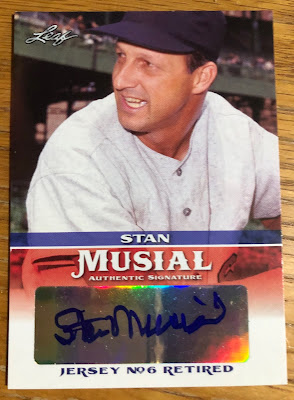 Yes, it’s a sticker auto.
Yes, it’s an unlicensed Leaf card (from 2015).
and Yes, the auto itself doesn’t look great.

But hey, I pulled a Stan Musial autograph from a pharmacy box!

Wait, hold on a second. The card was issued in 2015. Musial died in 2013. What? Some of you surely know this already. I didn’t. Apparently, Stan’s family and business people had him sign a ton of stickers in his waning years. Leaf bought the stickers and put out a product where you’re guaranteed a Musial auto with every box.

That’s morbid. It does diminish my enthusiasm for my hit some.

Musial, of course, was a first-ballot HOFer and one of the greatest and most consistent hitters in baseball history.

The backstory on the auto explains the devaluation of Musial’s autograph over recent years (COMC listings have autos from this Leaf series in the $22-40 range) and potentially how it ended up in a $5 repack.

Still, to pull this out of a pharmacy box feels like a win.