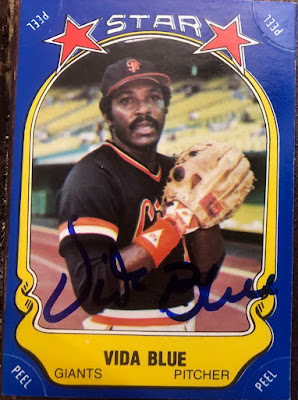 I had gotten Vida through the mail in 2019, before I committed to working the Fleer Star Sticker set. Of course, I opted for how history best remembers him: as an Athletic.

Blue debuted with the A’s in 1969 as a 19 year old. He saw limited action over his first two seasons, but the talent was obvious. He was a power pitcher with a fastball up to 100 mph. On September 21, 1970, he no-hit the Minnesota Twins.

His fantastic 1971 season brought conflict with notorious cheapskate owner Charlie Finley. Blue held out for much of the 1972 season. When he returned, he was not sharp. Nonetheless Oakland defeated the Cincinnati Reds to capture their first of three consecutive titles.

Blue returned to form in ’73 and was one of the best pitchers for much of the decade.

In 1976, in the midst of Finley’s birth of the free agency era-fueled fire sale, commissioner Bowie Kuhn vetoed a proposed sale of Blue to the Yankees. In 1978, Kuhn cancelled a proposed trade of Blue to the Reds. In both cases, Kuhn alleged the trades would be bad for baseball because, benefiting already powerful teams without making them give up any significant talent in return.

By the end of the ’76 season, Finley had jettisoned nearly every other key cog of the A’s dynasty, but Blue was trapped.

In 1978, Blue was traded to the San Francisco Giants. He’d spent four seasons across the bay, three of them All-Star caliber. He then spent two seasons with the Kansas City Royals.

Blue battled drug addiction over the course of his career. After the 1983 season, he and former teammates Willie Wilson, Jerry Martin and Willie Aikens pleaded guilty to attempting to purchase cocaine. He was suspended for the 1984 season.

After the year hiatus, Blue would return to the Giants for two more seasons.