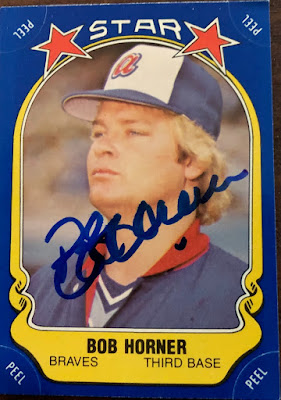 Before Horner ever played for the Atlanta Braves, he was an NCAA star. Manning second base for the ASU Sun Devils, Horner hammered a then-NCAA record 58 career home runs. He was selected College World Series MVP (1977) and won the Golden Spikes Award in 1978.

With that track record, it was no surprise that Atlanta took Horner with the first overall pick in the ’78 amateur draft. He is one of the handful of players to go directly from college to the majors without spending any time in the minor leagues.

Through his age-25 season (’83), Horner had already amassed 158 homers, swatting them a prodigious pace: on every 17 at bats.

His 1983 and 1984 seasons, however, were shortened with separate fractures to each wrist. He returned to form in 1985 with 27 homers and 89 RBI in 130 games and in July of that year, he became the 11th MLB player to hit four home runs in a single game.

Horner became a free agent in 1987, turned down several low-ball offers from the Braves, and received no interest from other teams. It was later found that MLB owners were colliding to keep salaries down. Horner opted to sign a one-year contract with Japan’s Yakult Swallows instead.

Postscript: In 2004, via player lawsuit over collusion, Horner would receive the biggest award: $7,034,112, including interest.

Horner returned to the Majors in 1988 with the Cardinals but was limited to only 60 games by should injury. He’d retire before what would have been his age-31 1989 season.