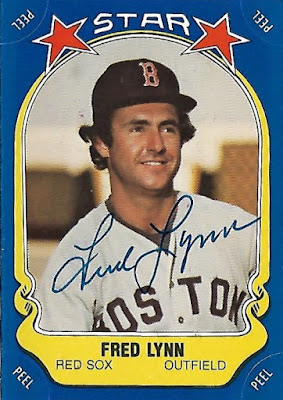 Not going to lie: super pumped to get this one back. For those of you card collectors that aren’t in on the whole TTM scene, Fred Lynn is notorious for sending a signed blue index card in lieu of the requested card. Look, beggars can’t be choosers. A success is a success, but getting the on-card return is a pretty big deal here. Mr. Lynn made my day.

Lynn burst onto the scene with the Red Sox in 1975, and was the first player ever to win both the Rookie of the Year and Most Valuable Player Awards in the same year.

However, Lynn's career was hampered by injuries attributed to his fearless play. He broke a rib crashing into the outfield wall (1980). He injured his knee breaking up a double play (1981). He suffered sprained ankles, a broken toe, and battled chronic back pain throughout his career. He never played more than 150 games in a season, and only topped 140 games four times.