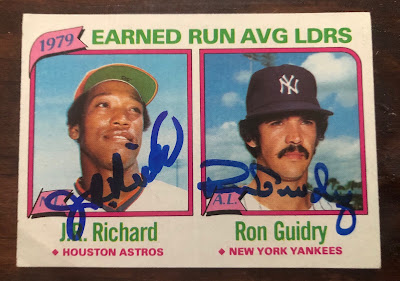 I’ve gotten J.R. Richard through the mail previously but when I came across this card, I told myself it would be really cool with ink from each of these 70's icons. Ron Guidry came back successful in January. Now completed, this jumps to near the top of my favorites list.


Who was the toughest pitcher for you to face as a batter?

J.R. Richard. He didn't have complete control, and he could have killed you at any time. – Johnny Bench [link]

By 1980, Richard’s age-30 season, he had emerged as one of the best pitchers in baseball. He was off to a brilliant start, at one point hurling three consecutive complete-game shutouts. He finished the first half with a 10-4 record, 115 strikeouts and a 1.96 ERA.

Richard exited a July 14th start in the fourth inning feeling deadness in his throwing arm. Tests would later reveal a completely obstructed artery. On July 30, Richard suffered a stroke and collapsed while playing pre-game catch, and was rushed to the hospital for emergency surgery to remove a life-threatening blood clot in his neck. He would not pitch in the majors again.
Posted by Jeff S at 5:55 PM