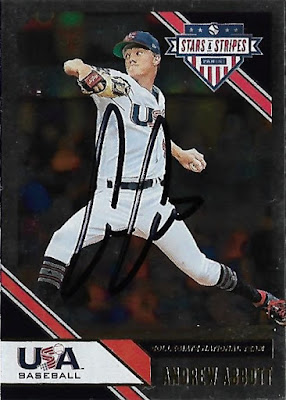 Another 2020 Stars & Stripes return, and this one sets a new standard for fastest return. I’ve had a few come back in six days, this is my first to come back in five.

Andrew Abbott was not only speedy; he included a nice note back addressing my boys. Class act.

Abbott is a left-handed reliever out of UVA. For the abbreviated 2020 season, the junior Cavalier had a 1.35 ERA (fifth lowest among ACC relievers with 10+ IP) while appearing in nine games. He struck out 28 (tops for any ACC reliever) in 13.1 innings pitched.

D1Baseball.com ranked him No. 7 in their Top 50 list of relief pitchers across the NCAA.

I’ve seen mock drafts in which he’s taken as high as the 2nd round. He was previously drafted by the New York Yankees in the 36th round (2017) out of high school.
Posted by Jeff S at 2:25 PM