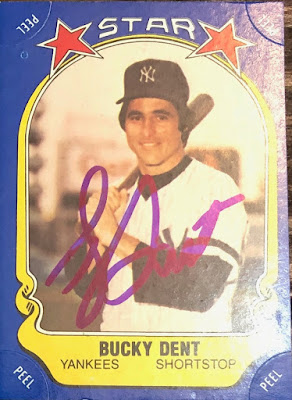 Before he was Bucky “Beeping” Dent, he debuted as a 21-year-old shortstop for the Chicago White Sox—the heir apparent to Luis Apariciio. Dent played four seasons in Chicago, finishing second in the Rookie of the Year voting (1974) and earning an All-Star nod in 1975.

In early April 1977, he was traded to the Yankees in a package that included Oscar Gamble.

Dent is most remembered for his 1978 three-run home run that propelled the Yankees past the Red Sox in the AL East division’s one-game playoff. He continued his hot hitting in the playoffs batting .417 (10-24, 7 RBI) in their second consecutive World Series win over the Dodgers. Dent was named MVP.

Dent would remain the Yankees shortstop until 1982, earning two more All-Star appearances (1980, 1981). The Yankees dealt him to the Texas Rangers in August for Lee Mazzilli. He would finish his career with the Kansas City Royals in 1984. He retired with a .247 batting average, 40 home runs, and 423 RBI.