A Pair of ’81 Star Sticker Pickups

In my pursuit of an all-autographed 1981 Fleer Star Sticker set, sooner or later I was going to have to move away from TTM and make some purchases. There are some notoriously tough autographs to hunt down, and of course a handful of these players are now deceased. Sad but true.

After recently posting my Phil Niekro success, I was contacted by someone open to unloading three from the set. I didn’t have two of them – including the late Don Baylor – and the price was right, so I pounced.

Neither of the cards are in particularly good condition; Baylor’s edges are chipped to hell, but I knew that (and again, the price was right). 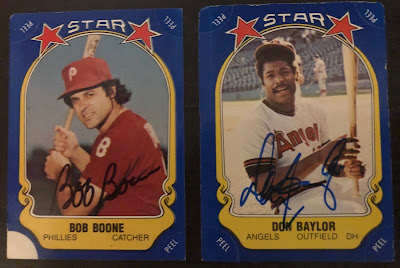 After parts of six years with the Orioles, he was traded to the Athletics before the 1976 season. The deal was a blockbuster: Oakland receives Don Baylor, Paul Mitchell and Mike Torrez. Baltimore receives Reggie Jackson, Ken Holtzman and Bill VanBommell. Charlie Finley was cleaning house.

After one season with the A’s, Baylor inked a deal with the California Angels as a free agent. After six productive years with the Angels – including the aforementioned 1979 MVP season – Baylor signed with the New York Yankees.

The Yankees would trade him to Boston for Mike Easler in 1986. For three years from ‘86 through ‘88, Baylor would reach the World Series (for three separate teams). Baylor reached the Fall Classic with the Red Sox in 1986, the Twins in 1987, and the A's in 1988. He would win his lone ring with Minnesota.

The other pickup was four-time All-Star catcher Bob Boone.

Boone might be best known for his family’s incredible MLB lineage. He is the son of the late third baseman Ray Boone and the father of both Bret Boone and Aaron Boone. All four family members were named All-Stars during their careers.

He was a member of the 1980 World Series champion Philadelphia Phillies. In September of 1984, with the California Angels, he caught Mike Witt’s perfect game.