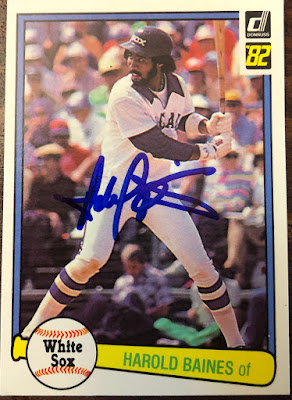 I don’t want to debate whether or not Baines is worthy of his induction to the Hall of Fame. Baines – who never got more than 6.1 percent of the BBWAA vote in his time on the ballot – is in.

After Chicago traded him midway through the 1989 season, they retired his number (#3), making him only the third player in baseball history to have his number retired while still playing in the big leagues.

A quick aside on card selection: When sending to players for TTM, I typically opt for a card that best represents how I remember the player. I don’t default to Rookies and, other than the 1981 Fleer Star Sticker set, I don’t prioritize specific sets/designs. In Baines’ case it was a toss up between this and his 1986 Fleer card. Neither depict his trademark high leg kick, so I opted for the ’82 – the year he broke out as a 23-year-old.

Baines was a remarkably consistent hitter and his 162-game average .289 average and 22 home runs looks right at home inserted anywhere in his 22-year career.