I’ve written it before: working a set, TTM is only going to get me so far. Sooner or later I’d have to supplement those efforts to fill some holes.

Not yet courageous enough to aim for some of the big (expensive) names in the set, when I saw a reasonably-priced Graig Nettles signing, I figured I’d give it a go. The signing was listed on SportsCollectors.net, conducted by “dugoutdug.” Other than the return hitting informed delivery one day earlier than my mailbox (causing 24 hours of mild concern), it went flawlessly.

(The promoter actually has another Craig Nettles signing scheduled for 7/31, if anyone is interested). 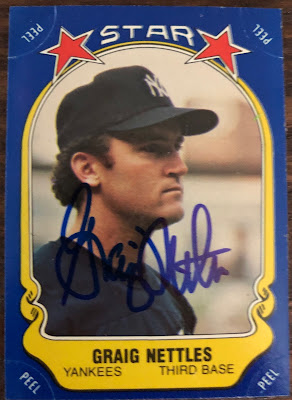 Anyways, Nettles was renowned for his defense at the hot corner. Over 22 years in the bigs, he was a six-time All Star, two-time Gold Glove winner (1977, 1978), and a two-time World Series champion. Despite modest batting averages (.248 for his career), he was productive at the plate and in 1976 led the AL in home runs with 32.

In the infamous 1976 brawl with the Boston Red Sox, it was Nettles’ take down that resulted in Bill Lee’s broken collarbone.

Nettles would serve as New York Yankees captain (the first since Thurman Munson) from 1982 until he was traded to the Padres (for Dennis Rasmussen) in March of 1984.

“Some kids dream of joining the circus, others of becoming a major league baseball player. As a member of the N.Y. Yankees I've gotten to do both.” [source]

He’d play three years in San Diego, earning an All Star nod at age 40 in 1985. He’d wrap his career with with single seasons in Atlanta and Montreal. He finished with 390 home runs and a career fielding percentage of .964