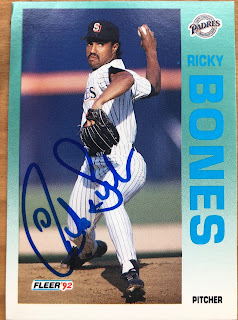 His time with the Yankees was brief. He was acquired in August of 1996, made four appearances, surrendered 11 runs in seven innings, and was left off the postseason roster. Nonetheless, he earned a World Series championship ring.

[Aside: to the best of my knowledge, no card exists depicting Bones as a Yankee. Correct me if I’m wrong. I have an affinity toward short-stay Yankees cards.]

Bones was named as a PED user in the Mitchell Report. Within, a clubhouse attendant reveals he discovered a bag with more than two dozen syringes and six vials of injectable substances, including two of anabolic steroids in Bones’ locker. Bones himself told investigators that he’d been self-administering steroids and painkillers.